Regretfully, due to COVID-19, there currently are no plans for in person public concerts. In the meantime, we are continuing to express our love of music and invite interested singers to join us! Contact us for more details.

We will be holding “hybrid” rehearsals led by our Artistic Director, Alice Malach, starting September 9th, 2020. The rehearsals will be online, with an optional outdoor distanced masked rehearsal component, in North York.

A package of music will be emailed to all participating singers prior to the first rehearsal. New music this fall will be focused on accessible music of diverse cultures. The goal here is not to work on complicated repertoire, but to continue the act of singing for personal growth, joy and community. A number of pieces will engage the entire body by including movement. It is music that will appeal to children, for those of you who might have some little (or big) ones singing along with you at home! These are some of the pieces planned for the Fall (subject to change):

We will be workshopping the two songs from Malaysia with the arranger, Tracy Wong.

A Ceremony Of Carols
December 8th, 2019
The first half is the titled Ceremony of Carols, Benjamin Britten, with harp accompaniment.

The Events
Wednesday, March 11, 2020, 7:30
The Guloien Theatre at Streetcar Crowsnest
A theatre production The Events with Neccessary Angel Theatre Company https://www.crowstheatre.com/whats-on/view-all/the-events
Written by David Greig
Original Music by John Browne
Directed by Alan Dilworth
We were grateful to participate in this amazing production in the last show before the run, and our season, drew to a close due to the COVID-19 pandemic. 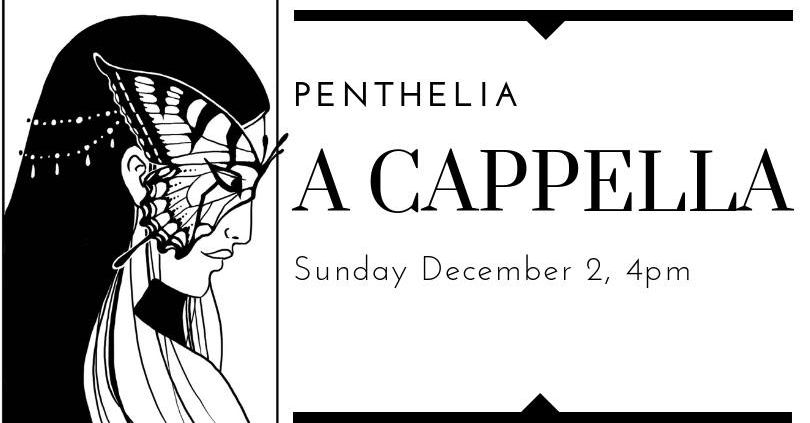 Sunday, December 3rd, 2017
Continuing our celebration of Canada’s 150th birthday, join Penthelia Singers for an afternoon of Canadian music, including a selection of music based on Inuit poetry and folk songs. Special guest, Raigelee Alorut, will present a throat singing demonstration as part of the concert. Other music includes works by Srul Irving Glick, Mark Sirett, and Meaghan Smith. .  Alice Malach, Artistic Director.

Sunday, May 27, 2018
Part of the Sing! Toronto Vocal Arts Festival, celebrating Acappella music from around the world, this concert will focus on the beauty, strength, and power of the female voice.

Sunday, November 22nd, 2015
Join Penthelia Singers for an afternoon of musical magic and enchanting songs to inspire and delight you. The concert features a special guest magician/illusionist.  The rich musical selections include a variety of styles of music spanning from the Renaissance to Contemporary, including favourite magical themes from Cinderella and The Wizard of Oz! Alice Malach, Artistic Director.

In the Kitchen with Penthelia Singers

Sunday, June 5th, 2016
Penthelia Singers invite you to join us in the kitchen for an east coast inspired kitchen party! Traditional sea shanties and Acadian reels will blend with modern Canadian classics to get you clapping your hands and stomping your feet. Alice Malach, Artistic Director. Special musical guests Kirk Elliott, fiddle, and Marty Smyth, piano.

Sunday, November 23rd, 2014
Penthelia Singers present songs from Scandinavia, Northern Europe, and across Canada.  Join us as we sing the sounds of wind, snow, and ice, as well as the warmth of the hearth and company of friendly folk.

Music of the Americas

Sunday, June 7th, 2015
In celebration of Toronto’s hosting of the 2015 Pan Am Games this summer, Penthelia Singers is pleased to present a concert inspired by the rich musical heritage and cultures of the Americas – from Mexico to Ecuador to Canada and the USA. Join us for an evening of song, featuring works for women’s choir such as Las Amarillas and La Lluvia (Stephen Hatfield), O Susanna, Northwest Passage, and many more! Alice Malach, Artistic Director.

A Tribute to Canadian Folk

Sunday, December 4, 2011, 3:00pm
A variety of a cappella music for women’s choir ranging from Renaissance madrigals to contemporary Canadian compositions.

Sunday, November 28, 2010, 3:00pm (pre-concert) & 4:00pm
Women’s choral arrangements of nursery rhymes, lullabies and other texts reminiscent of childhood memories. The child-friendly version of the concert at 3:00pm features props and treats and a sing-along!

A Night At the Opera

Sunday, November 29, 2009 3:00pm
Penthelia Singers with Nancy Olfert and the Branksome Hall Choir. Both choirs are featured individually and jointly as they unite the neighbourhood in song. Alice Malach, and Nancy Olfert conductors. Rosedale Presbyterian Church.

Journey to the Middle East and Beyond

Sunday, May 30, 2010, 3:00pm
A varied selection of choral repertoire based on texts and music from the Middle East, singing in languages such as Arabic, Turkish, Persian and Hebrew. Featuring collaborations with musician and composer Aaron Lightstone and belly dancing from the Shades of Araby dance troupe. Alice Malach, conductor. Miles Nadal Jewish Community Centre.

For concerts from our first ten seasons under the artistic direction of Mary Legge, please click here.